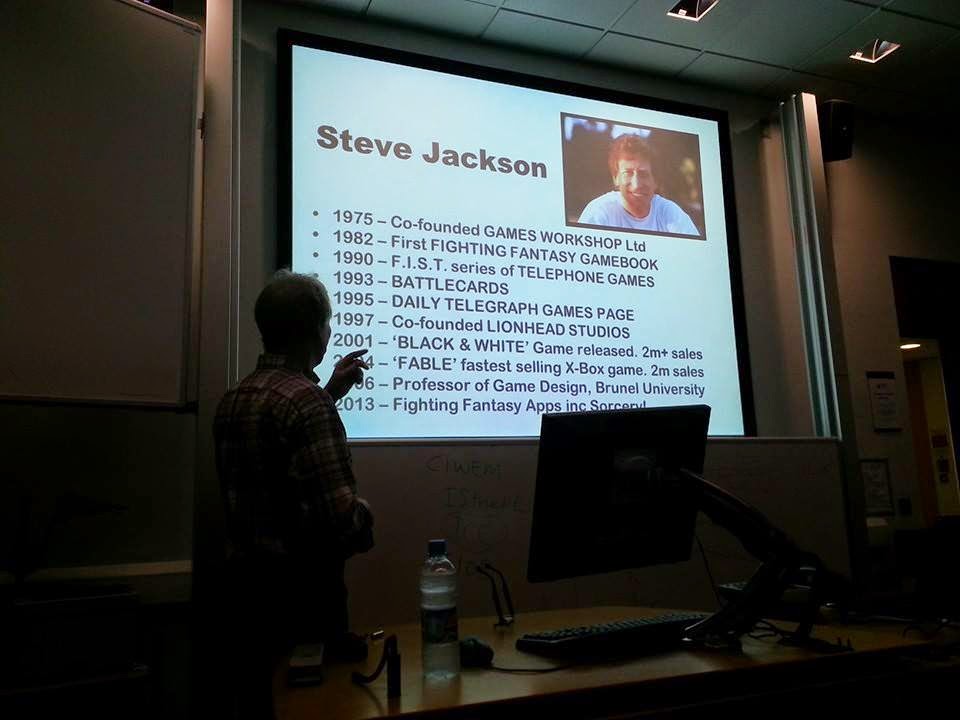 The second week of the course and we're slowly settling into a routine of balancing course requirements with all the amazing things that occur in London. Although, to be honest, most of the week was spent valiantly fighting a cold which I victoriously beat into submission. Either way, the classes go on and this week has been full of activity.

To begin with, another student and I have decided to set ourselves a rigorous work plan to get the most out of our course. We call it timetable a le rigorous. Aside from solo work such as reading and playing videogames, we are organising gatherings three times a week where we can: Play board games together. Create board games together using game design tasks. Practice MMF 2.5. All in the spirit of criticising, learning from and pushing each other to being the best game designers we possibly can.

In our game design class our task was to create a board game of a videogame in groups of four using crafts material and one hour of time. At the end of the hour, we'd have to have the rules written and watch other students play our creation. We chose to materialise Don't Starve. I won't get into the rules of the game here but we managed to get a working prototype ready by the end of the hour. The major lesson learned was the importance of clear rules and how to present them to the players. In ours we fractured them into two sets. In the rule sheet we started with an introduction: One sentence of what the goal of the game was followed by where the players should start and the general mechanics of the game. Specific rules of the objects you would find on the map were written on the object cards which you would pick up as you came across them. This meant that the students we gave the game to could instantly start playing after reading the first 5 sentences and indeed they did and understood it well. In this sense it was a success. As for balancing, it still needed a lot of polishing.

Steve Jackson started his talks from "Dice to Mice" where he illustrates the history of games. This week he took us on a journey from the Royal Game of Ur to Pokemon sprinkled with highly entertaining anecdotes of the early Games Workshop and dungeons and dragons scene in the UK. He really is a games design wizard with ridiculously awesome wisdom stats!

Theory touched on simulation and immersion. Aside from the debates in class which I won't go into here, we looked at the metaphorical simulation found in For the Records, a website working with psychologists and mental illness patients to bring representations of what having a certain mental condition is like. The game we played simulated what it felt to be bi-polar. After discussion we were asked to quickly describe how we would simulate a particular feeling through a game in our group tables. Someone suggested fear which we narrowed down to a specific fear such as the fear of heights. The setting would be a cliff and the features would be: 1. Loss of directional control as you get closer to the edge. At first you'd be able to control movement but as you got closer we'd invert the controls until finally no matter what you'd push would bring you a step closer to the edge. 2. Movement is slowed as you get closer. 3. Environmental sounds fade out. Internal sounds get louder (heartbeat and breathing). 4. When you get close to the edge the camera tilts up, concentrating on the drop. The reaction from Kelly: A shiver followed by a "I would not want to play that". I'm still conflicted on whether that is a good or a bad thing.

In the spirit of our timetable a le rigorous, Tim and I decided to challenge ourselves into creating a board game in 1 hour. The words our professor gave us were "aliens" and "cows". We set down to work however would often get distracted by the evil villain above roaming the board games room. An hour and a half later we were playing a game we had just created with more notches of valuable lessons learned. The game was all about cows (on a hexagonal grid field) who are tired of being the victims of alien abductions so they decide to fight back the only way they know how: eating, pooping, moving. The first concern was that as only two of us were making this game, we found it much harder to bounce back and forth ideas. We managed to overcome this by getting a prototype out half an hour in. After that point, ideas and refinements flowed much better and we got much further ahead in our design. We looked at previously played co-op games such as Castle Panic to inform how this game should work. Another interesting observation was how tightly the game mechanics and rules we had created were related to the aesthetics of the game. Halfway through the game creation we tried re-skinning it as something other than aliens abducting cows but didn't find another world in which the particular mechanics we had would make sense. This further reinforced my belief that in order to create innovative games the mechanics and the aesthetics of the game need to be co-dependent so that one cannot exist without the other.

New games played this week were limited as my board games arrived (Dixit and Gloom) and I was super excited to get everyone to play them. However I did get my hands on Dead of Winter when two professors came hunting for students to play the game with them. It reminded me a lot of Battlestar Galactica which is a game I enjoy a lot, except there was one thing I found Dead of Winter didn't do so well. It tries to create conflicting agendas between players however the co-op aspect of the game is so strong that we ignored our personal agendas for the survival of the group. More weight needs to be placed on the personal agenda by creating real consequences in the game. Another game I played was The Yawgh with two bachelor students in the games lab. It is an incredibly funny game that often had us in stitches though what was especially interesting to me was seeing the different play styles of each of us. One concentrated on the stats, another in keeping in character, while I found the most entertainment in the story as I created the town drunk who after the Yawgh becomes the town leader. It's a truly inspirational story.