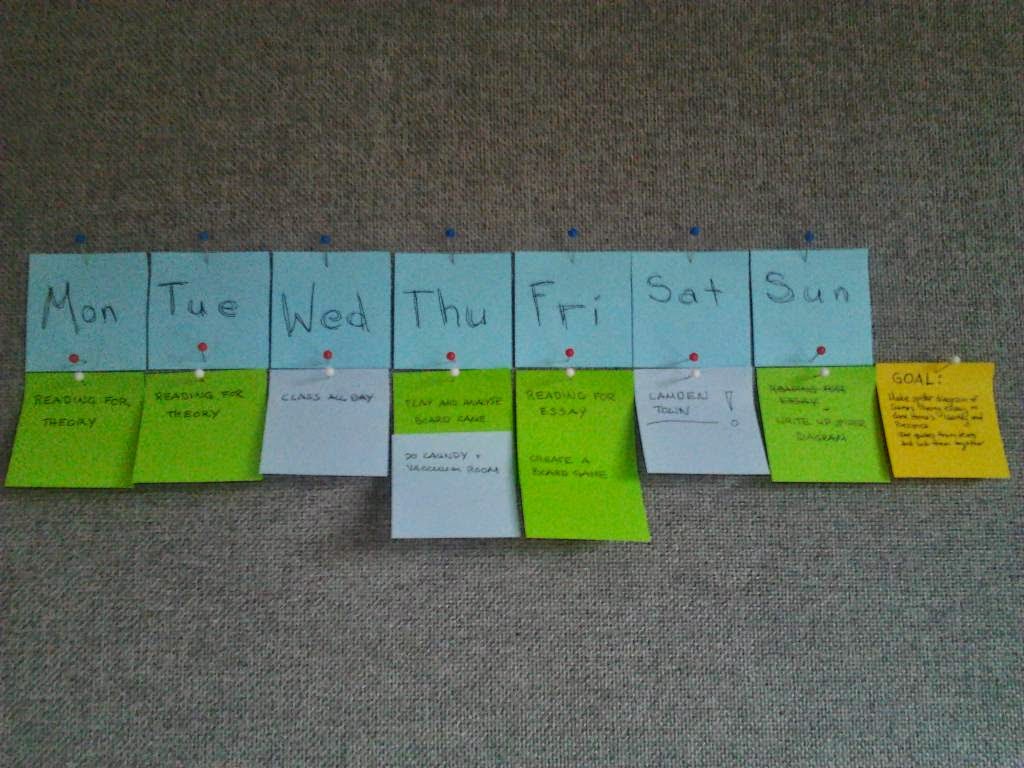 Hermione levels of organisation have been reached. The mysterious "timetable a le rigorous" has taken physical form and is now pinned up on my corkboard. It's even featuring scary weekly goals in yellow. And what a help this timetable has been! It has structured my workload and focus each day to a particular area of my studies. While following this timetable throughout the week, I have come to realise I have many more hours during the day that I originally planned. These hours have been filled with reading for the first assessment of the theory side of the course.

This first assessment has been the main focus of the week. Due in five weeks, we are to write an essay analysing a game through one of the concepts talked about in theory classes. For a while I've been clear on doing a write up on Gone Home, a game I not only enjoy, but find has strong links to semiotics as seen through urban exploration and psychogeography to propel a narrative and game world. I've only just recently decided on this particular topic after a week of researching papers and thickening a flipboard on Gone Home. After researching these papers and true to the goal of this week, I pinned my ideas on the corkboard to start structuring arguments. Designating Sunday for goal-oriented activities was not one of the best ideas as I realised I didn't have enough time to flick through and include most of the texts I wished to. This left me stressed on a Sunday afternoon as the diagram felt very last minute and I had no string to connect the ideas. On the other hand, next week's goal is less time consuming, leaving me more space to continue to expand the diagram (and get more string).

There were plenty of board games played this week including Ghost Stories, Shadows over Camelot, Resistance and Avalon. Ghost Stories was particularly difficult as it took our group two hours to read and understand the game rules. They used various diagrams meant to make it easier but gave no key to comprehend them. This left us scratching our heads as we played around with the positioning of game elements and player turns, trying to figure out how it was meant to be played. After a collective effort, we finally managed to understand it and decided to learn from the booklet: Never draw diagrams without keys, run through the game step by step, use key words repetitively, don't use lingo, ask yourself what questions your readers are going to be asking, start with a very clear and concise background of the game.

Shadows over Camelot, Resistance and Avalon are three very similar games in it's use of a traitor and sabotaging of quests. Camelot, by fleshing out the quests, concentrates the players focus on the cards and character actions as a way to identify traitors while Resistance and Avalon, through the lack of detail in the quests, focuses the players attention to the other players and our relationships among them. The game becomes much more psychological and a wildfire of distrusting glances were shot across the table. Interestingly, we played Resistance and Avalon one after the other meaning we could compare how small changes to rules could give different experiences. Resistance can be seen as a simpler version of Avalon. Through the lack of extensive rules and limitation of failures, players concentrate on just the psychological. Avalon is closer to Werewolf in that there is a psychic who knows who the traitors are and the traitors capability to kill the psychic. As there is no limitation to the amount of repeat quests, it means there is more time to figure out who the traitors are and quite often they are known by the end of the game. The implementation of the Werewolf mechanics balances this.

Less time was spent this week on MMF than I had wished. Our game design class revolved around messing about on the program and during it we completed a rain simulator. The rest of the class I played around creating a portal runner. I managed to get the scrolling and portals working when I ran against a bug that has proven quite difficult to solve. At one point I had various students sitting around my computer trying to lend a hand. We managed to figure out it was the coordinates of the mouse mixed with the scrolling that confused the computer. It was solved by replacing the control of the portals by using the keyboard but it meant that the game played much clunkier. This has been my MMF dilemma of the week.

There have been plenty of fun things happening through this week that reminded me of how much I love the vibe of this course. At the beginning of Steve Jackson's seminar, he grabbed four students and had them preform a magic trick; we discovered a little museum of old consoles in the secret room including the very first Atari and home computers; and finally, Tim and I invested and placed a very cool new poster to the games lab. If the games industry is as awesome as this place, I'm going to be a very happy game dev.